Everyone who spends time outdoors eventually meets one of nature’s most stealthy pests: the tick. Ticks aren’t anyone’s favorite visitors, but getting a bite from one of these pests can be worse than you imagine. Tickborne illnesses like Lyme disease are becoming more common in the United States thanks to a combination of mild winter weather and increasing rodent populations in wooded areas.

Luckily, pest control methods are available to help you eradicate the pests so you can enjoy your property. 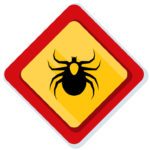 What Type of Ticks Are In Central Indiana?

Indiana is home to approximately fifteen species of ticks, including black-legged, lone star, brown dog, and American dog ticks. These four species the only types of ticks that are known to transmit tickborne illnesses in the region. Each of these four species is part of the Ixodidae family of hard ticks, while soft species are members of the Argasidae family. Soft species are not currently known to transmit diseases to humans but may be a nuisance when found in large numbers. Hard species are easy to identify because they have visible mouthpieces and a hard plate on their back.

One of the four hard species, only the black-legged known to transmit Lyme disease. Black-legged ticks also carry other illnesses, however, so it is important to visit your doctor if you have any unusual or flu-like symptoms after begin bitten, especially when nymphs are too small to have any easily identifiable characteristics. Nymphs are as small as a grain of sand, but about 30 percent of these tiny arachnids carry disease-causing bacteria. Because the nymphs are so tiny, they are also easy to miss during an examination, which can increase the risk of remaining attached for longer than 24 hours.

What Are The Health Risks of Ticks To Your Family and Pets?

Diseases transmitted by ticks include STARI, spotted fever, Lyme disease, ehrlichiosis, tularemia, and paralysis. Paralysis caused by ticks usually resolves within a short time of removal but can be life-threatening when ticks remain undetected after symptoms begin. Pets can also become infected with tickborne illnesses, including Lyme disease, babesiosis, and spotted fever. Dogs can also become infected with anaplasmosis or hepatozoonosis after being bitten.

Like humans, dogs can become infected with tickborne illnesses. Canine anaplasmosis is carried by the black-legged species. This canine illness causes a variety of symptoms in dogs, including fatigue, bleeding gums, and loss of appetite. In both dogs and humans, most symptoms appear within 30 days of the bite, and many symptoms appear within just a few days. A rash is one of the most visible signs that you have a tickborne illness in humans. If you, or your pet, have any unusual or flu-like symptoms after a bite, or if you develop a rash after a bite, seek medical care immediately.

How to remove a tick

According to the Centers for Disease Control (CDC), if you find a tick attached to your skin, there’s no need to panic. There are several tick removal devices on the market, but a plain set of fine-tipped tweezers will remove a tick quite effectively.

If you develop a rash or fever within several weeks of removing a tick, see your doctor. Be sure to tell the doctor about your recent tick bite, when the bite occurred, and where you most likely acquired the tick.

What Kind of Damage Can Ticks Do To Your Property and Home?

Ticks are typically found outside the home but can enter wall voids and lay eggs in the insulation. When this happens, you may find scores of the arachnids inside your home or in the crawlspace. Ticks also nest in hidden areas, such as wood piles and under leaf litter. Regular lawn care helps reduce populations on your property, and storing items off the ground is recommended to eliminate possible nesting areas.

Ticks pose a significant risk to both humans and pets when large populations are located on the property. Eradication is the best method of control, especially when you have children or pets who spend time playing outdoors. Tick treatment controls the number of ticks on your property and reduces the risk of becoming infected with a tickborne illness. With the proper tick treatment, both humans and animals can enjoy your home and property throughout the year.