Bees are not only known for their honey, but for their painful stings as well. As sweet as the name may sound, an upset bee will sting you with all it has. Eventually, the bee also dies after stinging when its stringer breaks into the skin and is ripped off their body.

Typically, a sting might annoy you with a little temporary swelling, pain, itch, and redness at the infected area. But if you are allergic to bees or suffer multiple stings, things can get severe and problematic.

When a honeybee stings you, it leaves behind its stringer embedded in your skin which contains a toxin, if you are allergic to that toxin you will suffer severe symptoms. The toxin contains proteins that infect skin cells and immune system.

Symptoms of bee stings may vary from mild to extreme reactions, according to the nature and quantity of stings. These stings can produce a different reaction; some may experience mild pain, while others may suffer a severe allergic reaction.

People with allergies to bee stings may be advised to get immunotherapy to avoid these reactions. Or, your Doctor may prescribe an Epinephrine Kits at home. These kits provide an auto-injector for you to inject yourself in the event of a bee sting. Having a kit at home can be the difference between life and death for someone who has a severe reaction to getting stung.

Usually, bees sting in self-defense. If a person disrupts a hive or a swarm of bees, he will likely end up with multiple bee stings, especially if they’re African honeybees. African honeybees are an invasive species that are slowly taking over the United States. They are widely known for their aggressiveness and attacking in swarms. Thankfully, we’re not seeing them in our climate at this point! 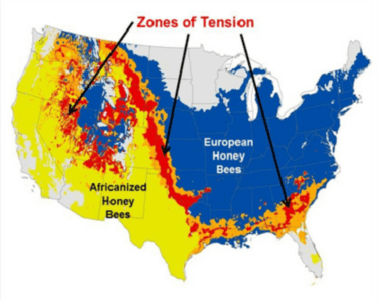 Symptoms of multiple bee stings include a severe headache, nausea, vomiting, high temperature, convulsions, vertigo, and fainting. Multiple bee stings require an emergency treatment, as they can cause serious complications in children and adults with heart and breathing problems.

If your reaction is mild, you may not need to visit a doctor. Home remedies will ease your pain and treat other symptoms, as well. The first thing you’ll want to do is carefully remove the stinger with tweezers or something similar. Don’t squeeze the stinger, as it can cause more venom to be released. After the stinger is clear and you’ve washed with an antibiotic soap, you’ll want to relieve the pain.

Following are the remedies that are mostly used to counter the reaction of a honeybee’s sting:

If the reaction is severe then you are strictly advised to consult a doctor because as discussed earlier, a severe allergic reaction can be life-threatening. A mild reaction doesn’t need medical help, but a multiple sting and a severe reaction are considered as an emergency which require an immediate medical aid.

A medical team may even perform CPR if you stop breathing as result of an anaphylactic reaction. You may be given following medications:

If you ever experienced a severe or multiple sting reaction, then a physician might recommend you to get allergy shots. These shots are generally given regularly for few years and are known to eliminate allergic response to bee venom.

How to Avoid Getting a Bee Sting

An ounce of prevention is worth a pound of cure; therefore it is wise to take necessary steps to avoid any such condition. If you live in an area where you have to face honeybees then you should:

Following above mentioned advises is important, as it is better to be proactive than to be reactive!

Fine Print: We’re not Doctors, so always check with professionals on the proper treatment of bee stings. We’re just trying to put some commonly known information out there. And of course, you can call us BEFORE you get stung if you see a bee infestation. Of course, if you have a large property, you may even wish to start beekeeping!

How To Find and Remove a Tick

How Can You Prevent Pests From Getting in Your Home?