Even though it’s one the many insects that leap, the cricket is known for its distinct chirping noise. Or, more often than not, it’s the chirping sound that drives you to remove everything in the garage… but still can’t find.

The cricket features a flattened body and long feelers on its head. In general, it appears somewhat similar to a grasshopper. They are both of the order Orthoptera. While the field cricket is usually about 1 inch in length, the common house cricket is rarely bigger than ½ inch on average.

Whether you love it or hate it, ignoring the loud chirp of a cricket is not easy and hearing this noise in your garden is not unusual, especially on warm evenings. Although it’s not even close to the sound of an ice cream van, the chirp of a cricket fascinates children just as much. 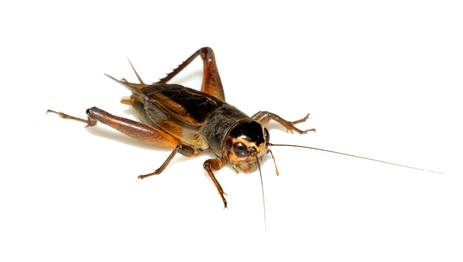 The cricket is a part of mythology and folklore in many cultures around the world. In Brazil, it is believed that the chirping noise is a sign of coming rains. In Barbados, the chirp is welcome when it’s coming from inside the house since they believe it’s a sign of future wealth. In other cultures, the same is considered a death announcement. In some Asian countries, these insects are deemed a good omen, and often kept as house pets.

5 Facts about the cricket

Many people cannot tell a cricket from a grasshopper. Although they are related, these insects don’t belong to the same family. To help you understand the cricket better, here are some interesting facts about these noisy bugs.

According to the insect identification database, there are five species in Indiana, namely:

Insects do not adhere to the borders illustrated on maps and are typically drawn by the availability of food, weather conditions, water supply, environmental factors, and their mating patterns among others. As such, they might not be exclusive to any general area even though they tend to be territorial.

Do Crickets Pose Health Risks to Your Family or Pets?

Although these noisy bugs can bite, they are not likely to bite humans. Additionally, their mouthparts rarely puncture human skin. While they aren’t particularly harmful, these insects are not necessarily harmless. The danger lies in the parasites and diseases carried in their bodies and waste, including salmonella, E.coli, and worms.

You may develop sores or a painful rash on your skin if you touch a cricket or its feces. You might accidentally introduce harmful bacteria if you handle food, ingestion of which could lead to several different health issues. Unfortunately, the symptoms of pest-borne diseases are often blamed on the flu, meaning the flu-like outbreak in your home might be connected to a cricket infestation issue. While this insect carries a significant number of diseases, none of them is fatal to humans. Unfortunately, this still does not negate the fact that you need to consider professional cricket treatment.

Can Crickets Damage Your Property or Home?

One of the reasons you shouldn’t have this type of insect hopping around inside your house is that they are indiscriminately destructive. Inside a home, these pests will feed on whatever they can find. They can destroy all your house plants, much the same as locusts.

The cricket is also known to damage fabrics, furs, leather, paper, rubber, and wood. Household items soiled with food stains, urine, sweat, and other bodily secretions are likely to suffer the most. The food value in these stains is what attracts the pests. Wallpaper glue contains starch, and this is what the insects will be feeding on when they damage the wallpaper. It’s important that you take some precautions since crickets can destroy what you consider valuable. Engaging our services is the best solution.

Other Interesting Facts about Crickets: