Pentatomoidea, the scientific name for stink bugs, produce an intensely foul odor that permeates the air. Before you consider moving to escape the noxious odor, consider your options for removal.

Stink bugs are well-understood, and effective options are available to eliminate the infestation.

Why Do Stink Bugs Stink?

The odor these insects release is a defense mechanism that helps protect it from predators. The bug products the scent in a set of glands called aldehydes. The two glands produce enough of the odorous liquid to equal about one-fifth of the insect’s body weight. While this may not seem like a lot, the odor can be very intense.

Generally, crushing the bugs isn’t a recommended way to manage an infestation. Crushing these insects releases their odor, making the odor harder to manage inside your home. Some people state that the scent released when you crush a stink bug attracts more of the insects to your home.

The real attractant is another scent released by the insects once they find a warm place to spend winter. The second odor is released when the stink bugs are well-established in a warm place, such as behind a wall. The scent that attracts more stink bugs isn’t noticeable to humans. 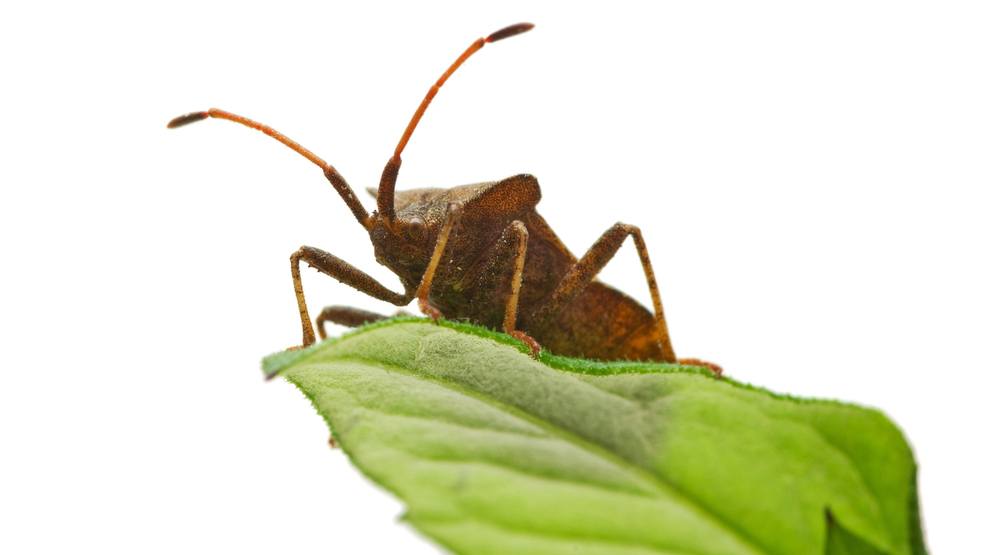 What Types of Stink Bugs Are In Central Indiana?

The United States is home to well over 200 species of stink bugs, and many of these species are found throughout the Midwest. Brown stink bugs are often very similar, while the marmorated stink bug has unique markings. Most species share the distinctive shield-shaped back and have the ability to produce a foul odor.

Additionally, the marmorated species is usually the only species that enters homes at the beginning of winter, although you may find an occasional stink bug indoors that is a different species. The brown marmorated species is relatively new to the state but has established large populations in some areas.

The marmorated species is distinct because its shield is outlined in alternating black and white lines, and because the insect is much darker in color than many native brown species. The native species has a solid, light brown color with brown legs and no white markings on its back. Other species may have orange or white markings, depending on the species.

What Are The Health Risk of Stink Bugs to Your Family and Pets?

Stink bugs are usually harmless for humans and pets. The stink bug doesn’t sting or bite and typically doesn’t produce an odor unless it is threatened or crushed. Some exotic pets that are very small, such as tarantulas and hermit crabs, are more at-risk than larger animals. Experiments have shown the odor is occasionally harmful to insects, including other stink bugs.

The odor must be concentrated in a small, poorly ventilated space, such as a lidded, airtight container, to have a serious effect on other insects or small animals. While the risk to smaller pets is minimal, you can take some steps to keep your pet’s cage safe from stink bugs, such as providing a cage or enclosure that is properly ventilated. The odor is harmless to cats, dogs, birds and other common pets.

What Kind of Damage Can Stink Bugs Do To Your Property and Home?

To control the odor, ventilate the affected areas. You can also use a vacuum to remove any visible bugs, but choose a vacuum that has bags to keep the odor contained. If you use a canister vacuum, the odor can remain in the canister long after the insects are gone. Baking soda-based carpet cleaner helps remove odors on carpeting and fabrics.

The stink bug can cause minor problems in the kitchen, especially during warmer winters when the insects swarm frequently. When the insects swarm, they may enter your pantry and contaminate food supplies. While the insect doesn’t actually eat the food in your pantry, the foul odor can permeate some types of food packaging and ruin the contents. Storing food in the refrigerator, freezer, or lidded storage containers will reduce food waste caused by odor contamination.